The Finch House is a remodel and addition by Doerr Architecture located at 71 South Sherman Street in Denver, Colorado that was completed in 2005.

The client, Holle Finch, was a ceramicist with strong environmental ethics and knowledge. Holle had an international style bungalow that had very poor energy performance and a leaking roof. She wanted a little more space, a remodeled kitchen and bathroom, and a roof that did not leak. She also wanted to create a ceramics studio and garage off the alley in back.

The design of the house was inspired by the lines in the client’s ceramics. With its dynamic vaults, the design also expresses an unfolding, or emergence. A welcoming porch was added to the front and the garage was placed back on the alley to contribute to the humanity of the neighborhood.

Circulation was changed in the kitchen to make it and the adjacent dining area more functional. The upper bathroom was enlarged and updated. Since we were adding a new roof to get rid of the leaks, we put an extra bedroom up under it.

The house uses a Direct Gain Passive Solar System to save over 90% of heating and cooling energy. Despite the home’s tight urban site, we obtained excellent passive solar heating and cooling by designing southern glass equal to twenty percent of the upper floor areas. This glass was placed high so the neighboring building would not block the low winter sun. This southern glass is shaded with overhangs that block the summer sun. To avoid more summer heat gain, little glass was used on the east and west. Even the ceramics studio is passive solar.

With its double width masonry, Holle’s home had very little insulation (its new windows actually had a better R-value than the walls). However, the masonry could have been excellent thermal mass so we encased it in rigid insulation so the masonry was now on the interior where it could do a lot of good. The new roof framing is filled with excellent Icynene foam insulation.

Clearstory windows use natural convection to exhaust summer heat and pull cool night air across the thermal mass. Most rooms have windows on two sides for cross ventilation. Ceiling fans are installed for addition comfort. An air destratification system was designed to take high winter heat to the cool basement.

These clearstory windows also wash the double-height wall with natural light without glare. Most rooms have glass on two sides for balanced light.

By addressing all of these issues, Holle now has a home that fits her space needs, her aesthetics, and saves her energy costs while assuring she is comfortable despite any energy instability; plus the roof does not leak. Unfortunately, now she has to deal with the paparazzi: “We can hardly stand in our yard without passersby commenting on the beautiful and unusual design.” Holle might have to deal with more paparazzi now that her house has been featured on TV for winning the 2008 Mayor’s Design Award.

This house was featured in the video Passive Solar Simplified.

To arrange a free, no obligation consultation, contact Thomas today.

Check out my book: 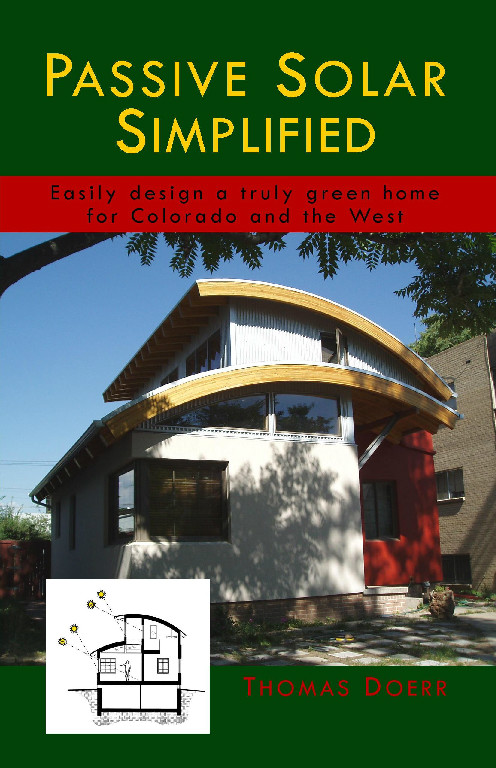 "We're really enjoying the new space and the ease it adds to gatherings of friends and family." — Cindy Troxell